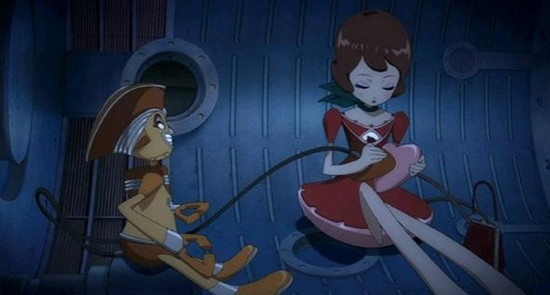 Lately, I’ve been thinking (and chatting with Curtis at Iridium Eye Reviews) about the idea of ‘Top’ Lists and why I hesitate to do them.

Basically, I’ve decided it’s because I tend to chicken out before posting, even if I get so far as to think a few of them through and sometimes even write up a couple of notes. And today, that trend toward steering clear of the word ‘Top’ or ‘Best’ will continue 😀

Instead, I’ll just use a number.

And so here’s 5 Unfinished Anime that I wish had been finished a little more. (I use the word ‘finished’ with varying degrees of accuracy here too). I’ve actually reviewed most of the entries but I’ll try not to rehash too much.

Battle Angel has great character conflict and designs, along with a classic conspiracy aspect to the plot. It also presents an engaging post-apocalyptic/cyberpunk setting with a reasonably gritty visual style that maybe could have been refined even further had the series continued? Obviously, the team also had a decent amount of source material to continue on with.

One thing the OVA included that I liked was the Chiren plot line, where she and Ido have a past. I would have liked to see that explored somehow, along with the aftermath of events in the final episode as per their effect on Gally. Author Yukito Kishiro was happy for this short series to drive viewers to the manga and a recent James Cameron adaptation also makes it clear this won’t be continued.

This is a longer series, with thirteen episodes produced but once again – it never gets the chance to explore the full scope of the source material, and there’s a lot left and a huge story that could be adapted.

Legend of Basara is classic 1990s shoujo with a mix of action, historical elements and romance. It has a fun, almost Shakespearean premise and there’s some hidden identity stuff that really worked for me.

I’d say Sarasa’s story has zero chance of being continued as an anime, as KSS had other priorities in the form of Naruto and have now folded in any event.

Here’s another one with plenty of source material that could allow the bigger story to be completed, the grim but gripping Claymore.

The first twenty episodes had a grand build up with impressive rising tension – and then everything got rushed and compressed, leaving many plot threads simply abandoned. The climax to this story about vengeance is pretty flat too and maybe if it had been given a chance at even a second season, some key things could have been concluded.

Could this be picked up again? Maybe. Beserk actually got a bit of a continuation a few years ago and many folks consider Beserk and Claymore to be similar enough that perhaps there’s an audience there.

Staying in 2007 for Moribito: Guardian of the Spirit now, and this is a complete story with a satisfying conclusion.

And so to tweak what I mean by ‘unfinished’ here, this time it’s not just that I know the light novels continue Balsa’s story, it’s because the end of season 1 so perfectly sets up the idea that she is about to set out on a homecoming-kinda quest to confront aspects of her past.

Since she’s such a compelling character I often think about tracking down the English version of the novel, but I don’t remember how many of the series have been translated. Whether Production IG will continue this… I don’t know, probably not since the series is not shonen or isekai, which seems to be what the market is seeking at the moment.

A little different from the others – as it’s a film but also because it’s literally unfinished.

Before director Satoshi Kon’s death he was working on Dreaming Machine and had described it as a ‘road movie for robots’ and as an adventure film. It sounded like it would have been a bit of an ‘all-ages’ thing which would have been fascinating to see him do, since his other works have generally been darker.

Around a third of the film’s shots had been animated, and while Masao Maruyama did pledge that Madhouse would continue and finish the film, over the years he has pulled away from that and eventually said that it wouldn’t be right for someone else to finish the movie:

Instead, we should take only Kon’s “original concept”, and let somebody turn it into a feature film. By doing so, the completed piece could 100% be that person’s work, and I’m OK with that.

Since then he’s expressed even less belief in the likelihood of the work being completed, despite suggesting that it would “not be impossible” to restart with a talented foreign director.

I believe there is a chance this film could be completed one day… more so than some of the other titles I mentioned in this post, just not any time soon, perhaps.

And there we go!

I’ll try to come up with another ‘Not a Top 5’ style post one day but I’m not sure when that’ll be just yet. Still, I had fun with this one though. 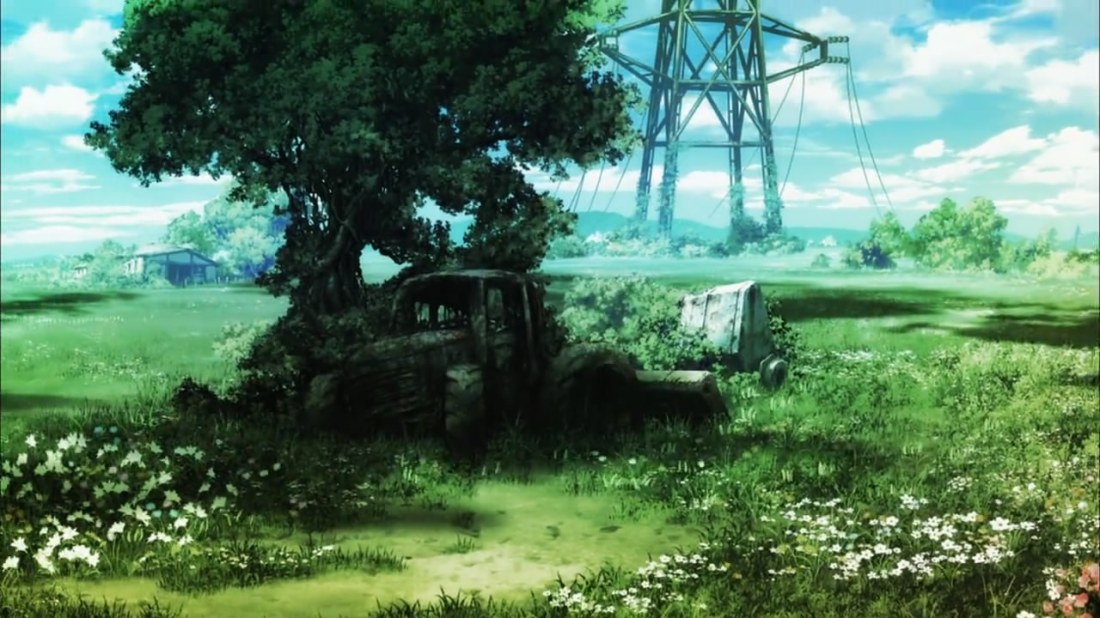 Here’s a short post on a few shows that I found myself unable to finish – there might not be a lot of detail because for two of them it was a few years ago now when I put each series aside, but having said that, I don’t want to rule out finishing them one day.

Still, here’s a couple of notes on each of ‘em in what might become a semi-regular post!

I believe I got about four or five episodes into this classic and while the cat-and-mouse aspect was great, I quickly found that I didn’t care about Light and his psychopathic tendencies. One thing I know would have (and may well do one day) convinced me to keep watching would be if the series had given me more from Ryuk and the world of the Shinigami, as he was the real highlight for me.

From memory it was only about two or so episodes before I moved to something else. Somehow, a mutant, overpowered girl escaping a military facility didn’t turn out to be as exciting as it sounded. It’s got that flashy, gratuitous opening that most anime fans are at least aware of and despite a stunning title sequence; there were a few storytelling contrivances that didn’t gel for me. However, it’s a short series so I might finish it one day.

This one’s a little fresher in my mind but I only managed one full episode – and once again, something that at face-value I should have really enjoyed, just didn’t grip me.

I still can’t put my finger on it… maybe there wasn’t enough tension for a post-apocalyptic story? Giving a show one episode isn’t much of a chance, I’m more than happy to admit that, and the scenery alone is almost enough for me to keep watching but I haven’t found myself compelled to return to this. I liked the stylistic choice of heavy outlines on the heroines too but the opener didn’t have enough of a hook for me I guess.

…and back to regular reviews next! 🙂

Dimension W only just finished its run as a manga late last month, so I thought I’d do a review on the anime today, which I really enjoyed except for two aspects – but more on those two issues below.

If you’ve read any of my short reviews here, you’ll know I don’t often bother with a plot summary (as they’re available elsewhere) and maybe that’s lazy of me… so in honour of not being lazy this time… I’ll copy one from wiki 😀

“Dimension W” follows an auto mechanic hobbyist named Kyouma Mabuchi and a robot girl named Mira Yurizaki, both of whom are “Collectors”, bounty hunters tasked with confiscating illegal Coils, dangerous devices which can harness the power of another dimension.

So with that out of the way, what did I like about this anime?

In many ways the series is a great action/technology-based science-fiction show that follows the classic narrative structure of slowly escalating stakes and tension, intercut with character back-story. And it definitely did those things well enough for me to enjoy it, especially the pacing of some of the central mysteries and how characters were actually connected.

But what I found just as engaging were other elements the series incorporated – there were obvious critiques of society’s celebrity-worship via supporting character ‘Loser’ and his storyline, metaphysical elements (these seemed a bit shaky, perhaps) and also some horror aspects, especially with the gothic-influence of episodes set in the ‘haunted’ hotel.

Now, I’m painting a bit of a disparate picture here perhaps, but Dimension W is more cohesive than it sounds, though it does miss a few opportunities to explore the main casts’ relationship, especially the curt and troubled Kyouma and his ‘side-kick’ Mira.

This is one bit that, considering plot points that are later revealed and which I won’t spoil, I would have liked to see more of. (That’s not to say any development between them is absent, just that more would have been welcome).

Okay, so on to the two elements that didn’t gel for me – first, a few moments that went beyond ‘fan-service’ and directly to ‘gratuitous’ and it just didn’t fit. This isn’t to claim all fan-service is terrible but yeah, this time it didn’t work, I reckon. The other aspect is more important as a flaw, if you’ve ever heard the phrase “a hero is only as good as the villain” then sadly, it fits Dimension W fairly well.

However, the show still has a satisfying finish, partly because by the end you’re given those final few secrets and some loose ends are wrapped up.

Knowing this series was based on a long running manga, I’m sure studios 3HZ and Orange (who also did the Norn9 adaptation) would have liked Dimension W to continue when they greenlit this a few years ago now, and I would have too but I guess it wasn’t popular enough.

Just a quick review for right now – today it’s The Skull Man which is a noir-ish science fiction/horror series with a few surprises.

When I started this, I wasn’t aware that the anime was based on a one-shot manga by the massively influential Shotaro Ishinomori (who was one of Osamu Tezuka’s protégées) and that the series sort of served as a prequel to Cyborg 009.

Due to that, the ending of The Skull Man fell a little flat for me in that it didn’t offer perhaps quite enough in the way of resolutions while at the same time opening up too many new questions.

But aside from that I still enjoyed this, it’s a short series and while the box art might suggest more horror – there are moments of levity and maybe overall, there’s more of an ‘investigative reporter gets in too deep’ feel to everything, even with the science-fiction elements.

(It’s also an interesting look at an alternate reality where a 1970s aesthetic is clear in the costumes and technology).

Throughout, the writers do a great job of keeping you guessing re: the true nature, motivations and identity of the Skull Man and the various villains within, and while I personally wanted a lot more in the way of screen time for the mask’s origins itself, there was still plenty of other aspects like cults and bioweapons to keep me watching.

Worth a look if you stumble across it, I reckon but you might be disappointed by how quickly it wraps up once it gets close to the end.