This is a short sci-fi ONA from 2001 – not so long into the slow rise of CGI in anime, and while it has a few problems for me, I didn’t end up abandoning Zaion.

Most aspects were good enough without being outstanding.

Which sounds like not much of a compliment, I know but not every single second has to be outstanding, right? The storyline was the classic ‘save the city’ this time from out of control space-virus mutations, with a small team of human-nano-machine-hybrid soldiers having to bear the brunt of the attacks.

That is, except for Ai, whose psychic powers are the only guarantee of victory.

Sadly, she’s a prisoner of her military & their scientists – and while she develops a relationship with male lead Yuuji, it was just as interesting to see the mother-daughter relationship between her and conflicted scientist Misao, who is her first ally.

I won’t go deep into the story but it plays out as expected, though with a more sombre ending than say a typical action sci-fi.

Despite things that kept me watching, I will say that the CGI is not integrated too well – the age of it is clear, and obviously Gonzo and the industry would improve over the years.

When it comes to the plot, there’s some real problems with the obliviousness of the general population too… but to go back to things I liked, the themes around the futility of war worked for me, and Kenji Kawai’s OST really stood out too.

Not sure I’d recommend Zaion, however, unless you are a fan of the era? 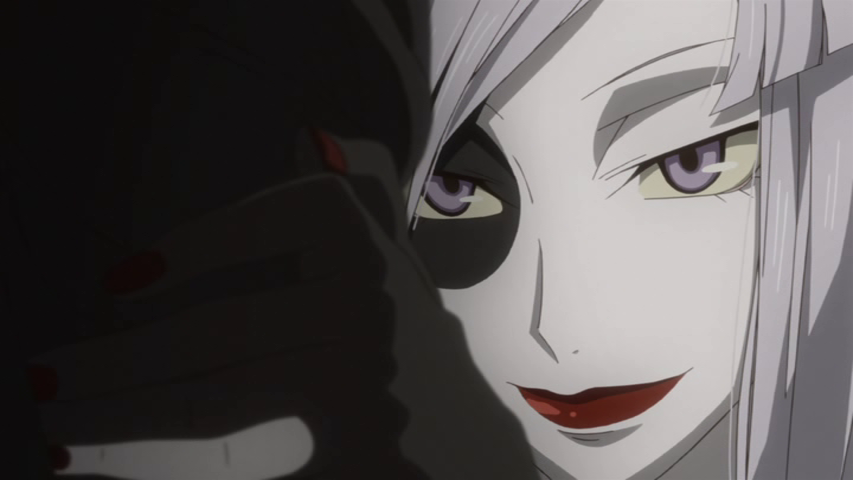 This series was fascinating.

It’s hard for me to accurately describe why I found it so – probably because of the contradictions within.

On one hand Un-Go feels like an uneven detective series and on the other it feels like an uneven philosophical text… and on the other hand it’s aesthetically pleasing, even stylish at times. On the fourth hand that I apparently have, it’s one of those shows that appears not quite able to add up to more than the sum of its influences, yet manages to become compelling.

Now, maybe I’m in a bit of a minority here with Un-Go but by the end I was ready for more cases and more of the interplay between detective Shinjuurou and his ‘boss’ Inga. The series is short (eleven episodes), with one double-episode length OVA as a prequel. I’d like to come back to that OVA actually, but for now I’ll mention that there is an overarching story that I preferred to some of the episodic parts.

While some cases felt rushed into single episodes, once Un-Go passed beyond that establishing phase the multi-part mysteries let the storytelling breathe a little, especially the final half dozen. In addition to what I consider an uneven start I feel like the pacing encourages the viewer to gloss over some plot holes or uneven character beats but the mysteries of the setting, the cases themselves and most of all, the exact nature of the contract between Shinjuuro and Inga were the main draws for me.

Un-Go is pretty good at drip-feeding it’s secrets too, and that’s another aspect that kept me watching – as did the oddness of Inga, who is basically a mix between Ed from Cowboy Bebop and Harley Quinn but it kinda worked. The anime takes on some big topics (albeit too briefly) around autonomy, privacy, war and finding purpose, and is far more adult in nature than say, Full Metal Alchemist. How’s that for a segue? I mention FMA because Un-Go is helmed by Seiji Mizushima and features Shō Aikawa in the writing chair.

However, I hope I haven’t misled anyone into thinking I believe FMA shies away from difficult themes, but its tone is a fairly different to Un-Go. And related to the question of tone – if you’ve seen this series and notice a reasonably pessimistic streak running throughout, then it might come from what is (to some extent) the source material.

Ango Sakaguchi was a post-war writer who seems to have been understandably struck by strong disillusionment, and one of his works Meiji Kaika Ango Torimono-chō, is the base for Un-Go’s lead, Shinjuuro who can appear to have lost hope at times. (But I think that’s about all that’s used from the source, since among other differences, the novel is set in the Meiji era and the anime is futuristic/alternate Japan.)

Finally now, I’m returning to the prequel I mentioned earlier.

The prequel is the most compelling of all the episodes in the series and perhaps even has slightly higher production values too, if that sorta thing matters to you. It also adds a bit of clarity to some of the Buddhist hints throughout.

But more important for me, was that Inga Chapter offered a lot of answers. Earlier I mentioned how I thought the show did a great job of maintaining my curiosity and it was pretty high by the time I saw the prequel. However, there’s a bit of debate out there as to when you should watch it – either before you begin the series or after episode eleven. On my DVD the OVA is on the final disc and so that’s how I saw it, and I liked that approach because it was enjoyable to finally get some back story for the lead characters and solve a few mysteries that had been hinted at since that tiny glimpse at the beginning of episode one.

(As a quick aside, the air date of the prequel was actually during the series itself, which is interesting.)

It’s clearly too late for me to watch Un-Go any other way ‘for the first time’ now, but if you’ve decided to hunt this show down then I guess consider what kind of viewer you reckon you are.

If you don’t mind having secrets held back for a long time, so as to build anticipation, then watch the prequel last.

If you suspect you might be a bit annoyed by a series that takes its time to return to the main concern, or if you like being one step ahead of the main characters and catching all the little hints they sometimes miss, then maybe watch the prequel first.

Okay, another ridiculously long review! Next time, I’ll aim for a shorter write up 😀 So, if you haven’t seen Expelled from Paradise I’d say this film strikes a balance between overpowered robots, cyber investigation, fan-service and good old fashioned post-apocalyptic stuff – yet it’s not precisely outside the mecha-sub genre either.

It also spends a bit of time exploring personhood, which is always welcome in my books.

There are some pretty fun battles throughout – I’d watch it again for those sequences and the sleek designs of the ships and robots too, but I reckon typical studio pressure shoe-horned a bit of the fan-service into the film.

Now, I don’t have a handle on the production context or reception it got at the time of release, but it’s easy to imagine main character Angela’s g-string costume (and the action) is meant to sell the audience on the film so the writers could later sneak in some philosophical aspects as the movie progressed? I mean, she’s not a one-dimension character but she is clearly typical in that she’s been costumed to be eye-candy for the male gaze.

In other aspects, Expelled from Paradise treats her as an actual character.

She realistically struggles with having to use a body once again (after essentially living as a virtual presence for part of the story) and she does become less conceited, so there’s some character development. And look, it’s not all bad and I think the film is probably worth watching for the animation alone.

Actually, maybe for the mysterious (and cute) Frontier Setter too, along with the other lead character who remains my fav, Dingo. He’s probably my favourite because he has the whole bounty-hunter thing going on, though Dingo is more open – and interestingly enough, in the English dub he’s actually voiced by Steve Blum (and Wendee Lee voices Angela :D).

This movie had a big budget and some big names behind it – Seiji Mizushima (FMA) Gen Urobuchi (Pyscho Pass) as director and writer, but Expelled from Paradise didn’t end up being brilliant or un-missable for me and I don’t see it listed as a classic on many lists… but once more, having said that, it was still pretty great in spite of the things I felt were shortcomings.

I felt like there was also a little nod to Ergo Proxy here when we meet Angela’s masters, though of course, not everything is a reference to something else – but I like to seek out the possibilities anyway 😀